If you had visited the Alaska State Fairgrounds earlier this month, you likely would have been shocked to see a school bus collided with a train. Figures strewn alongside the railroad tracks. Firefighters carrying victims with head lacerations and other wounds. Blackhawk rotors whirring as it carried patients to the hospital. 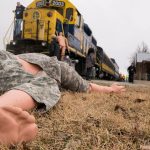 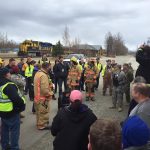 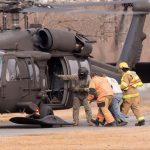 Luckily, all of these gruesome scenes were staged, as part of the Alaska Shield 2016 emergency drill. The exercise, organized by the Matanuska-Susitna Borough, took place on April 1 and 2 at locations throughout the Mat-Su, including the fairgrounds.

Held every two years, the Alaska Shield exercise allows responders to test their nerves and skill in a no-fault zone. More than 3,000 people participated in the 2016 drill, which included school evacuations, cyber attacks, terrorist threats, dismantling of a fake bomb, a hazardous leak, and the school bus/train collision.

“The Fair was pleased to be part of this important event, which helps ensure our community is ready to respond to disasters,” says Jerome Hertel, Fair general manager. “It’s another example of how the Fair works to be a gathering place for Alaskans throughout the year.”

See the full story and more photos on the Mat-Su Borough Facebook page.